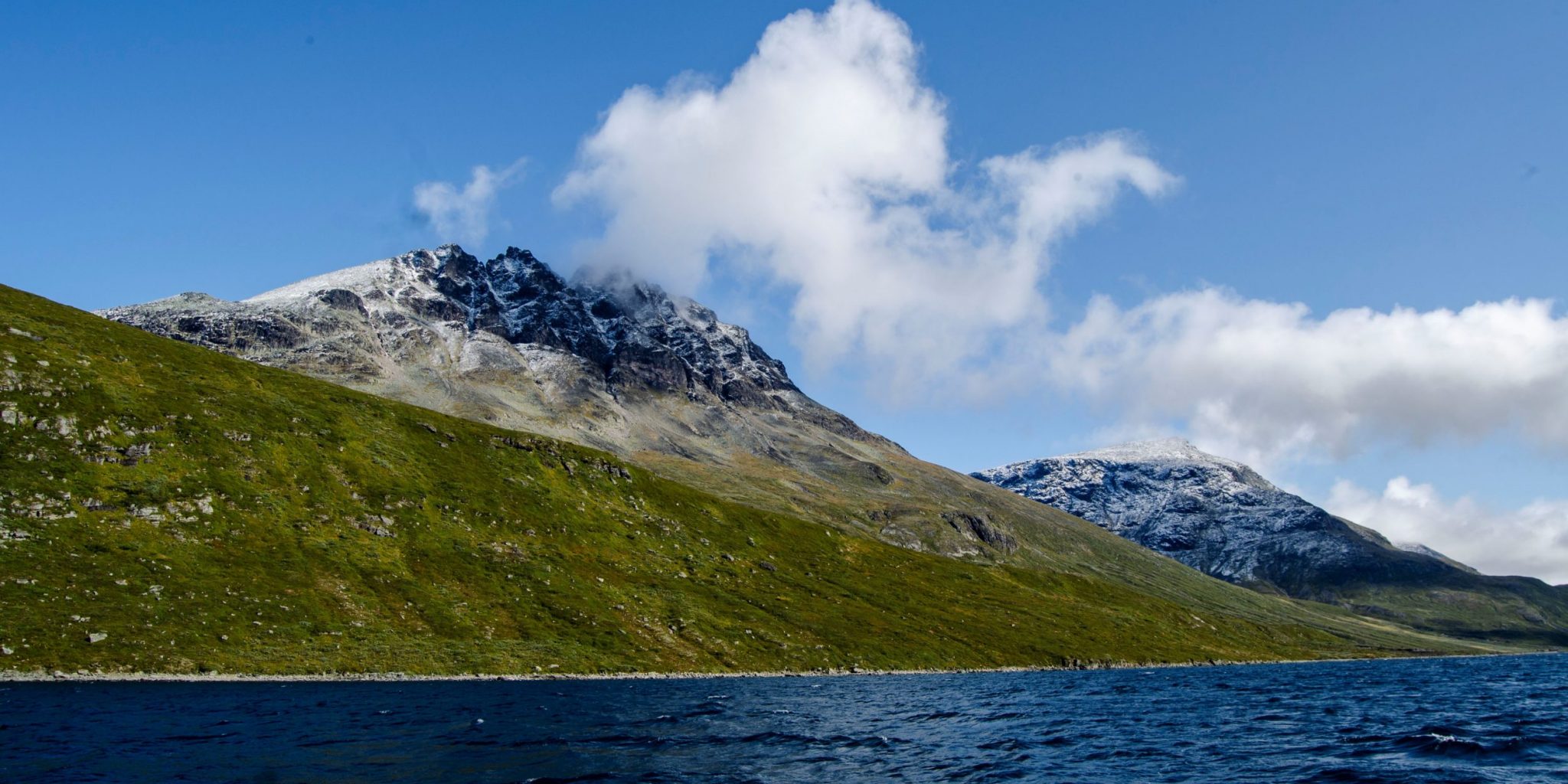 - literally jump from peak to peak

The three peaks of Jotunheimen, Øystre, Midtre and Vestre Torfinnstind, make up the trio Torfinnstraversen and are placed neatly on the mountain Torfinnstinden. Torfinnstindtraversen is one of the classics in Jotunheimen. The route offers spectacular panoramic views of Jotunheimen, which themselves are well worth the trip. In addition, you are guaranteed the sweets sense of achievement unlike any other, when having travelled across these three majestic giants. I mean – how many can say that they have in fact climbed three 2000-meter peaks in one single day?!

When hiking Torfinstindane it's all about finding the right way as a wrong turn or following a wrong chute can lead you in to tricky situations. Therefore, hikers and climbers should always be accompanied by a guide.

You can access the area by catching the M/B Bitihorn ferry from Bygdin (the place), and hopping off at Torfinnsbu. From Torfinnsbu, one follows the marked path towards Gjendebu up Torfinnsdalen, to where the terrain flattens out somewhat. Here you turn left onto an unmarked trail, which leads up into a chute formation that leads to the first peak. Here there will be some light climbing, which eventually becomes somewhat airy. After the first peak- and 1059 meter elevation has been reached, it is time to put the climbing equipment to use. The first rappel brings you down into the 100-meter deep “cut” between the eastern and the middle peak. There will then be some climbing up to the top, before there, a few meters from the top, awaits a new rappel down towards the western and last one of the peaks. This rappel is of the airy kind. After that, there are a few meters out to the next rappel, but first one has to climb up a leg that is graded 2+, and for some can be quite demanding. The third rappel is short and easy, while the forth and last one is the longest, and perhaps airiest of them all, as one has to go far into a dark, cramped gorge. From the gorge and up to the last peak, the rout is slightly exposed and airy, with some parts at a climbing grade of 2+. When you reach the western peak, you can look back on and admire the majestic mountain massif you have just crossed. Then, a steep, 1000-meter descend awaits you, as the journey goes back to Torfinnsbu.

Torfinnstindtraversen is well suited for thrill seekers and sporty mountaineers who like to take on a challenge. The duration of the trip across Torfinnstindstraversen may vary quite a bit, but it will likely take from 9 to 12 hours to complete and the distance is 10,5 km (out and back).

They say that the mountains around the mountain lake Bygdin belong to the kingdom of late poet Åsmund Olavson Vinje(1818-1870). He gave the area the name it is know for today, namely Jotunheimen (the land of the giants).

The three peaks of Jotunheimen, Øystre, Midtre and Vestre Torfinnstind, make up the trio Torfinnstraversen.

Eastern (Øystre) Torfinnstind lies at 2120 m.a.s.l. and is the highest of the three peaks. It was first ascended by Emanuel Mohn, British William Cecil Slingsby and Knut Lykken in 1876. The first was professor and mountaineer, and the second a well travelled alpinist and climber. The two set out to make several first ascents in Jotunheimen in the year of 1876. Because they knew that they would encounter glaciers they got a third person, Knut Lykken, involved. Knut Lykken was a local farmer, reindeer hunter and mountaineer from Østre Slidre.

Western (Vestre) Torfinnstind (2095 m.a.s.l.) is the easiest one to climb and was first ascented by Rolv Ødegaard in 1912.

Torfinnstindane is located in the southern part of Jotunheimen, by the shores of lake Bygdin, in the municipality of Vang. This iconic mountain makes up the most Southern part of a long line of twelve peaks all over 2000 m.a.s.l, stretching from Bygdin going North.

Bygdin Mountain Lake is one of the most characteristical reference points in Jotunheimen. It lies in the southern part of the national park and measures 28 km long and 2 km wide. During the months of July and August the boat, M/B Bitihorn, takes you across the lake to access Eidsbugarden and Torfinnsbu. M/B Bitithorn is in fact Northern Europe's highest lying boat route and and has been active since the summer of 1912!

Who is this Hike Suitable for

This hike is very demanding and only suitable for those in very good physical shape with previous experience for similar activities.

The main season is summer/late summer. This is when the area is most suitable for trekking. To access Torfinnsbu, one needs to travel by M/B Bitihorn that runs from late June to the beginning of September.

Stay at Bygdin Mountain Lodge or Fondsbu DNT which are located on the opposite sides of Bygdin Lake. Or spend a night at Torfinnsbu, a self-service DNT cabin right at the foot of Torfinstindane.

You can access the area by catching the M/B Bitihorn ferry from Bygdin Harbour and hopping off at Torfinnsbu. 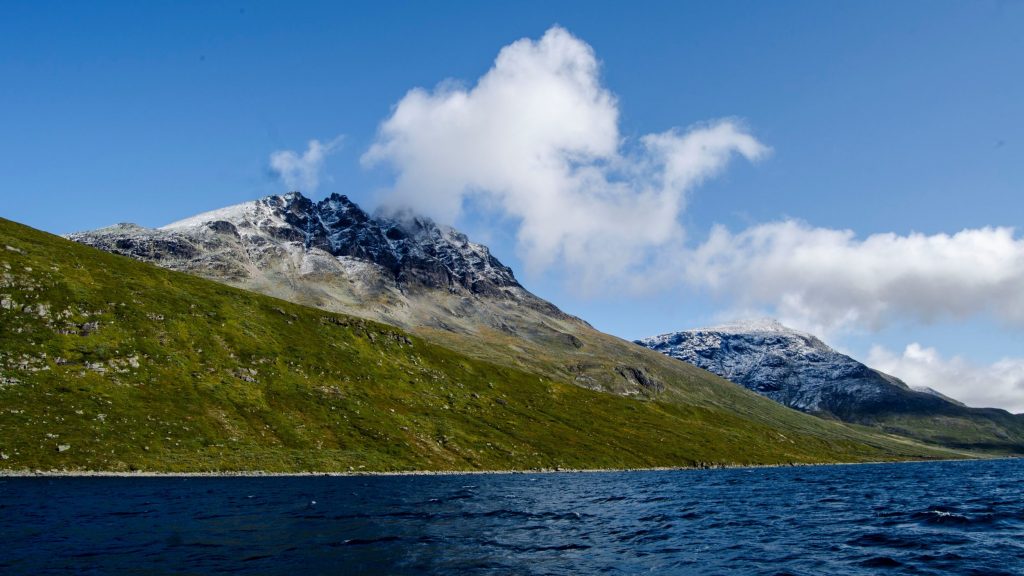 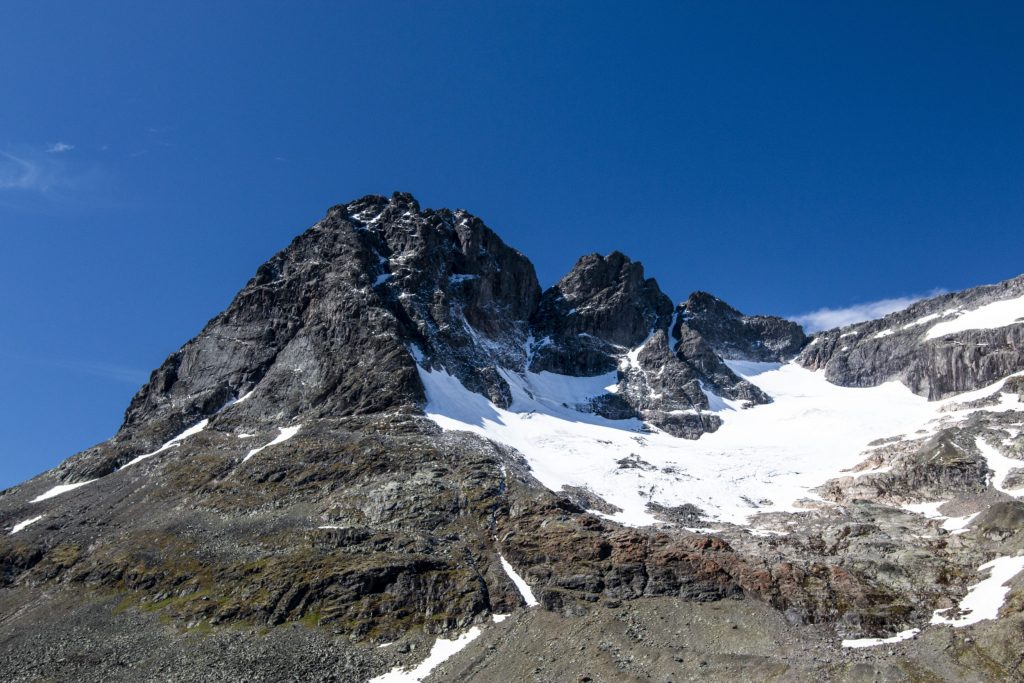 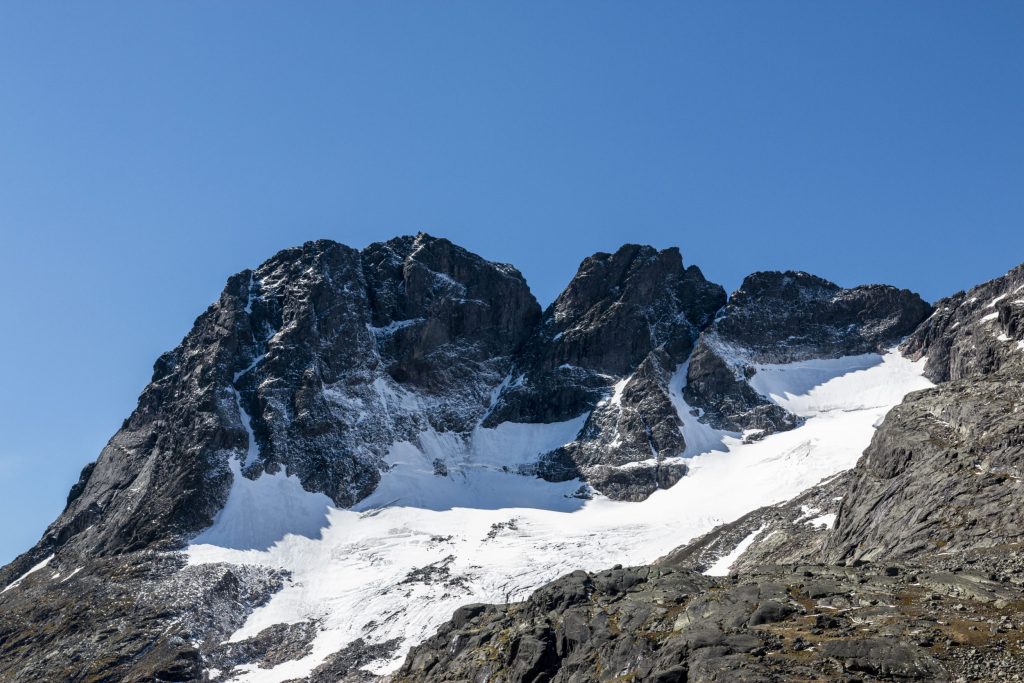 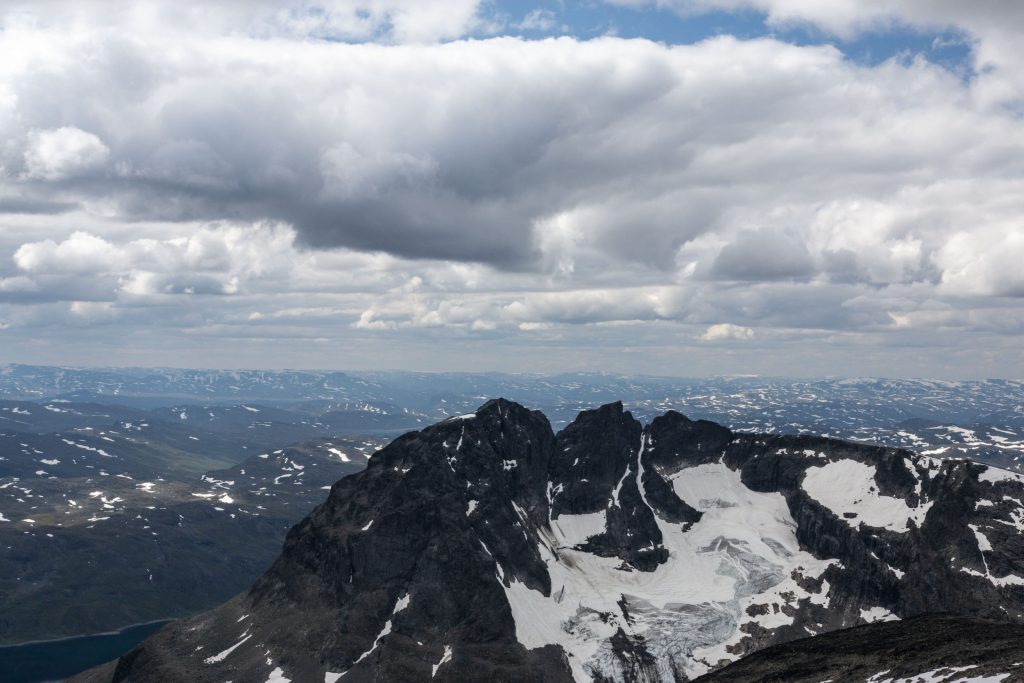 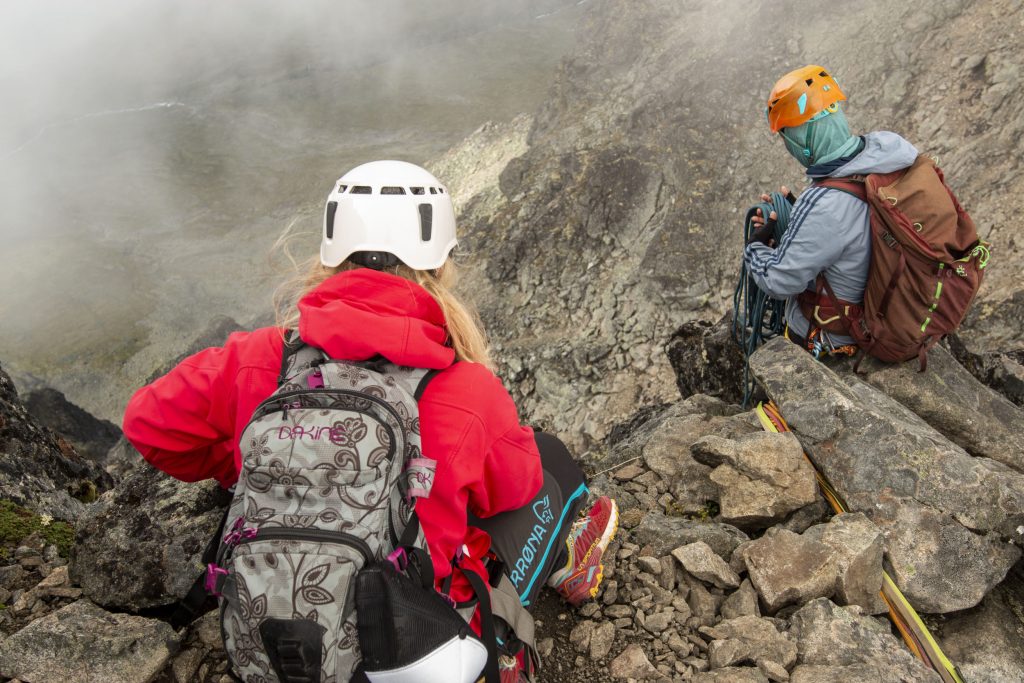 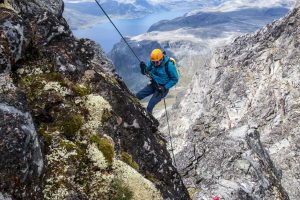 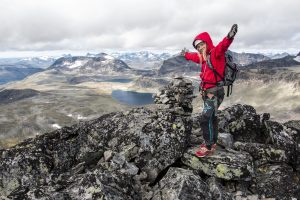 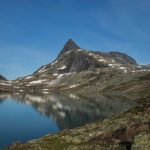 Falketind was first ascended in 1820 and was the first mountain of "alpine character " to be climbed in Norway. This discovery is considered "the awakening of Jotunheimen", as people became aware of the real potential and all the breadth of opportunities in the area. It is probably the most deman Read more 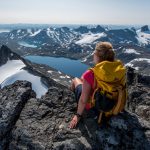 Uranostind - The Pride of Jotunheimen! The iconic Uranostind lies at 2,157 m.a.s.l. This demanding 10-11 hour hike is great for experienced hikers. The hike will take you past Urdadalsvannet on the way to Koldedalen. Once you reach the Glacier there will be a short change of equipment before t Read more 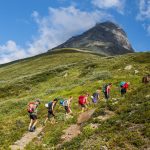 Østre Torfinnstind or “Eastern Torfinnstind” is the highest one of the mountain Torfinnstindane’s three peaks. At 2119 meters above sea level, it rises majestically in the sky behind Torfinnsbu, and can be seen from most mountains in the southern area of Jotunheimen. The hike is of the mor Read more